So, my decision to share space with my stalker has lasted for about five hot seconds.

Instead of a straightforward appointment for gamma knife radiation to my new brain metastases, I get an urgent recall for a more detailed brain scan.  In the meantime, I’ve developed an insatiable thirst, which keeps me up all night.  When I’m not drinking, I’m fantasising about drinking.  My dreams are all about scaling dunes in an endless desert, desperately searching for water.

The surgeon explains that one of the lesions is growing on my pituitary gland, which produces a hormone regulating water balance.  The lesion has given me a type of ‘water diabetes’ by interfering with this hormone.  Without it, I could drink a river and still be thirsty.

Worse still, the position of this lesion is very close to the optic nerves.  The verdict is that a dose of radiation strong enough to destroy the lesion could blind me.  Left untreated, the lesion itself will damage the optic nerves, resulting in severe visual impairment.

My stalker has hidden himself somewhere the gamma knife is unable to reach.

All bets are off.

The oncologist and the brain surgeon agree that the best option for me in this situation is ‘Whole Brain Radiation’, because it will kill all the lesions, even those not yet detected.  While this sounds sensible, and is indeed the treatment of choice for many women in this situation, it is abhorrent and terrifying to me.  Associated with WBR is ‘cognitive decline’.  It takes years to happen, but it gradually erodes one’s abilities to think and reason.

The unspoken truth is that I’ll most likely be dead before that happens.  I refuse to have WBR on the grounds that I’ve lost so much to this diseases – body parts that I really liked, plus a big chunk of my life – that I absolutely will not lose my intellect and my personality to it.

I read ‘The Cancer Whisperer’, in which a woman presented with ‘too many tumours to count’.  Her brain was rife with them, and she was told that WBR was her only viable option.  She refused, saying that of all the treatments she was offered to save her life, she would never consider WBR.  She went other routes and survived. This made a big impression on me.

SM is in complete agreement.  ‘What’s the point of any of this, if you’re no longer you?’  Every medical professional I ask, ‘Would you have WBR?’ answers, ‘Never.’

The experts look exasperated when I tell them to think again.  I’ve made their job much harder.  An endocrinologist gives me a synthetic hormone which stops the rampant thirst.

So my choices are possible blindness or early dementia.  The experts go away to have a think.  I go into a steep mental and physical decline, caused by the intensely debilitating effects of no sleep, constant pain, and relentless stress.  I have no energy, and no interest in anything.  I am spiraling down, unable to stop myself.

I go on a writing retreat, where I bury myself in my fictional world of France ca 1918.  It takes every single molecule of my strength to focus and keep writing.

I have a very wise South African counsellor, whose mantra is, ‘You’re not did yit.’  She advises me to build a shelter in my mind, where I can go to escape the storm raging around me.  The more detailed the image, the more effective it will be in shielding me from the trauma that I’m experiencing.

I imagine a concrete bunker with windowless walls and an extremely heavy door, completely featureless from the outside.  I struggle through hurricane force winds and rain and debris towards this door, swing it aside, and slam it shut on the chaos.

Inside, all is peaceful and quiet.  Not even the screaming winds can penetrate.  SM greets me with a kiss and a mug of hot chocolate.  The ceiling and walls are tented with beautiful, shimmering fabrics in ruby and gold and sapphire.  There’s a fire place suspended from the ceiling.  Around the room are soft throws and sofas.  The cats are there.  For once, no one is fighting. Our tabby rests Sphynx-like on a beaded cushion.  The two girl cats are stretched out on a rug, tummies towards the fire, completely comatose.

There’s the smell of baking brownies, and soft, tinkling music.   There’s a big pile of books that I’ve been wanting to read.  SM pats the cushion beside him and I settle down, snug, warm, and safe.

I start spending a lot of time in this shelter while I wait for a decision.

A few days later, the radiation surgeon gives me the news that, while the oncologists are still ‘enthusiastic’ for me to have WBR, his team have looked at my scans again and decided that they can irradiate the pituitary lesion without destroying my vision after all.  Although there are always risks, through sheer bloody-mindedness I have forced the medical establishment to be cleverer than it thought possible.

Many, many people have good results from WBR, but it’s not for me.  I have made my choice; others would choose differently.  It remains to be seen whether the gamma knife can indeed cope, but I have to try.  The stalker is going to get his ass fried again.

I open the door to the shelter.  The wind has dropped.  A weak sun is struggling to break through the clouds.  I feel that I can rejoin the outside world now, and face the next stage of this drama. 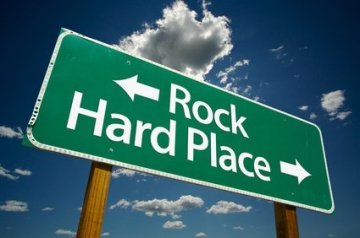